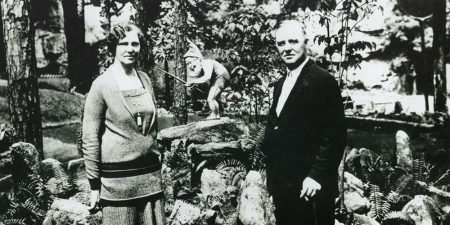 Mini golf is all the rage here in Pigeon Forge, and Crave Golf Club took it to a new level with its candy-themed wonderland. But, with its huge popularity, have you ever wondered how putt putt came to be?

The answer is pretty simple: it’s a local gem. In 1916, in Pinehurst, North Carolina, a miniature version of regular golf was invented. It featured a maze through gardens filled with fountains and geometric walkways.

This invention sparked inspiration in John Garnet Carter 10 years later in Lookout Mountain, Tennessee, just a couple hours south of Pigeon Forge. Carter is considered the father of themed mini golf. He gave miniature golf a new twist by giving it a fairyland theme. He called it “Tom Thumb Golf” after the fairytale “Tom Thumb” which was the first fairy tale translated to English back in 1621.

Frieda Carter, wife of Garnet, had a passion for fairy tales and nursery rhymes, hence, the theme of the putt putt course. She loved all things fiction so the course was filled with gnomes in costumes, stories to read on plaques, and a multitude of references to nursery rhymes throughout the course.

Carter invented the game as an attraction for guests at his inn. The sheer amount of visitors inspired him to co-found the infamous Rock City in Chattanooga, Tennessee.

We are proud of our state’s contribution to the game. This history of mini golf is rich here in Tennessee!